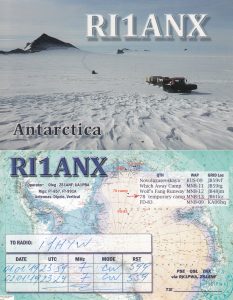 78 Temporary Camp has been activated by the well known Antarctic veteran  Oleg Sakharov  (UA1PBA, ZS1ANF, ZS7ANF) from january 1st   to 7th  2019 while travelling with a convoy on the way from FD 83 (WAP MNB-Ø9) to  Which Away Camp (WAP MNB-11)

Only 77 QSOs have been made  from this very rare spot in the icy Continent.