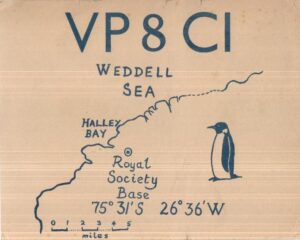 Let’s retrace a bit of history

Beginning with its dispatch of Halley on his geomagnetic cruise of 1699 to 1700, the Royal Society has played a sporadic, ad hoc, but nevertheless considerable role in the scientific investigation of the South Polar regions. In three ventures: Ross’s geomagnetic survey of 1839 to 1843, the first Scott expedition of 1901 to 1904 and the British contribution to the International Geophysical Year of 1957 to 1958, made major contributions to the planning and support of Antarctic scientific programs. Throughout, it has given backing to polar expeditions but has been consistent in putting science before geographical discovery. It has numbered some 20 Antarctic scientists among its Fellows. 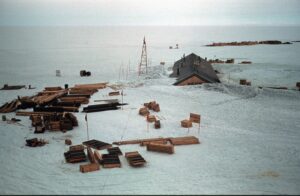 The original Royal Society Base was founded on 6 January 1956 by an expedition of the Royal Society as part of International Geophysical Year (IGY) 1957–58. The bay where the expedition decided to set up their base was named Halley after the astronomer and Fellow of the Royal Society, Edmond Halley. The year 1956 also marked the tercentenary of Halley’s birth. In 1977, the name of the base was amended from Halley Bay to Halley as the original bay had disappeared due to changes in the ice shelf.

The original station, Royal Society Base, was founded in 1956 for the IGY by an expedition from the British Royal Society. The bay where the expedition set up their base was named Halley Bay, after the astronomer Edmond Halley. It was a traditional hut with a pitched roof. FIDS (Falkland Islands Dependencies Survey)   took over the operation of the station on 14 January 1959 when  the Royal Society Base  was renamed into Halley Bay or Halley I Research Station (referenced by WAP as GBR-15). A new main hut and dog kennels were built close to the original IGY buildings in February 1961, by which time the latter were completely covered by snow. It was closed early 1968. 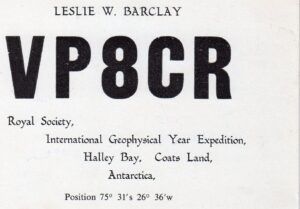 Thanks and credit  to BAS (British Antarctic Survey)