Here below, is a  bit of history on how Russia marked his presence in the Icy Continent with its several Scientific Bases at the beginning of international scientific expeditions to Antarctica.

In February 1956 the participants in the Soviet Antarctic Expedition (SAE) established the Mirny observatory, a Scientific Station (WAP RUS-Ø7) on the Antarctic mainland.

In May 1956, observations were begun at Pionerskaya (WAP RUS-1Ø), an inland station located some 375 kms South of Mirny.

In October 1956 the Oasis Station (WAP RUS-NEW) began working, located at the Bunger Oasis, on the coast of Wilkes Land.

The inland station Vostok-1 (WAP RUS-14), Komsomolskaya (WAP RUS-Ø5) and Vostok (WAP RUS-13) were founded in 1957; the latter was located near the South Magnetic Pole.

Between 1956 and 1958 eight stations were thus established under the IGY program. After IGY, observations continued at the Mirny observatory and the Vostok station.

In the following years a number of permanent, seasonal and temporary stations and bases were built.

As form 1968, Molodezhnaya (WAP RUS-Ø8) became the main base of Antarctic research as well as the Antarctic Meteorological Centre.

Year-round observations are now made at five stations of the Russian Antarctic Expedition (RAE): Molodezhnaya (WAP RUS-Ø8), Mirny (WAP RUS-Ø7), Novolazarevskaya (WAP RUS-Ø9), Bellingshausen (WAP RUS-Ø1) and Vostok (WAP RUS-13 which was temporarily closed in 1994). They measure meteorological and upper-air parameters, receive satellite information, an measure the levels of total ozone and of several other atmospheric trace gases. They also conduct a number of studies of the ionosphere. 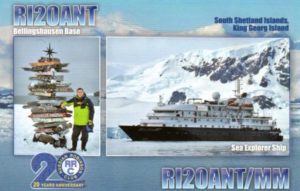 We would like to remark that Russia is probably the solo Country that have always been “On the Air” since the Antarctic epic, with hundreds of very professional Radio operators that, still now are very active on HF  Hams bands. Our appreciation to the constancy and tenacity of  all Russian radio amateurs who are an example of professionalism!

Let us not forget that , to celebrate the 20th anniversary of the Russian Robinson Club,  RRC club members Alexander/RW3RN and Oleg/UA3HK/ZS1OIN  have been active on last  December 2013, from the Russian Antarctic station “Bellingshausen” on the Island of King George signing RI2ØANT &.RI2ØANT/MM