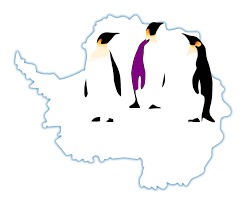 National Oceanic and Atmospheric Administration scientists have tracked krill populations in the southern oceans for years, but for the first time, they plan to use autonomous computer-driven drones to help with the basic research.

Krill are tiny crustaceans that are a key building block of the food web in the southern oceans. The shrimp-like creatures feed whales, seals, penguins and people. The tiny animals are known for their large underwater swarms.

NOAA scientists have tracked fluctuating krill populations for years as part of an international effort to better understand the food web in the Antarctic.

Click on the gif aside to see an interesting video of this project.
“We study krill so we understand whether its trends and abundance are likely to be influenced by how much fishing effort we do, but also whether that fishing effort will impact the upper trophic levels like penguins and seals,” said Christian Reiss, a senior researcher at the Southwest Fisheries Science Center in La Jolla.

But packing up a research vessel and traveling to the bottom of the world takes time and money. Both are in short supply at a federal agency that is keeping a close eye on shrinking budgets.

Thanks and credit to: https://www.kpbs.org/news/2018/aug/16/san-diego-scientists-use-drones-antarctica-researc/ where you can get more