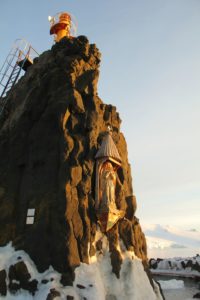 A “Church in Antarctica” as well as any other signs or place of worship in any corners of the Icy Continent are the most sincere examples of faith and genuine places of worship; they deserve to be known.

is officially considered the largest desert in the world, but even in this icy barren landscape, the explorers and scientists braving the harshest of climates, have still found time for religion. What the Polish researchers and technicians have done at Arctowski is really a touch of devotion !

The attached pictures are taken in Arctowski Station (WAP POL-Ø1) by the personnel who are working there. They show in a kind of niche, carved into the rock, a small statue of the holy Madonna, 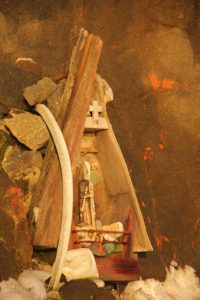 facing the Station buildings. A second bigger one,  is sets little lower. Both statues are located in the great rock on which the lighthouse stands out (62°09′28″South 58°27′56″West), and people at Arctowski, call this corner “Chapel”.
About the second (bigger) statue, there is a story associated to it: Around 1980, the staff employed at the station,  wanted a sign of religiosity to stop by for a moment of recollection. At that time in Poland, we had a communist regime and the government banned the creation of a space for worship. 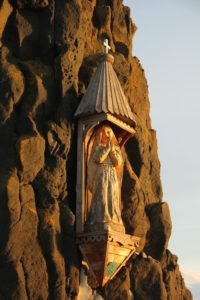 No way to put a statue on cargo ship that brought the supplies to Arctowski. The workers hid the statue of the Virgin in a deep cargo box and smuggled it out of Polish border. Now both signs of devotion are proudly on the site that Polish staff did choose for them.

Well, we are grateful to Sebastien Gleich  SQ1SGB and Margaredth Witczak who did help WAP in searching of worship sites in Antarctica.

In the area, there is also the grave of Polish wildlife photographer Wlodzimierz Puchalski, surmounted by an iron cross, stands on a hill to the south of the station. Puchalski died on 19 January 1979 in the course of filming a nature documentary in the vicinity of the station. The location of the grave and cross has been designated a Historic site or Monument (HSM 51), following a proposal by Poland to the Antarctic Treaty Consultative Meeting