The South Orkney archipelago is located about 600 miles to the S E of the Isla de los Estados, on the Atlantic Ocean, to the East of Isla Grande de la Tierra del Fuego of the extreme tip of Argentina; it consists of a group of nearly 40 islands and islets, most of them very small, with a total area of 1,000 square kilometers about.
Over there, next Febr.-Mar. 2020 a DX-pedition signing VP8PJ will land and operate for more than a week … but where they will operate from? Actually there are 2 Bases on the South Orkneys and few Refuges: which of those the Expedition will choose to operate?

Argentinean Naval Orkney Base (WAP ARG-15) is located at 60º44’02” South and 44º44’00″ West, on the Ibarguren isthmus, on Laurie Island, between Scotia Bay (to the South), Uruguay Bay (to the North), Cerro Mossman (to the West) and Glacier la Monja (to the East) and elevated 12 meters above sea level, this being the narrowest part of Laurie Island, which has an East-West extension of approximately 12 miles and its width is very variable.

The highest height of the island is Mount Ramsay, 454 meters high.  On the same Island, in the Cormoràn Point lies the homonymous Argentine flagging Refuge, which is active throughout the year providing support to patrols and biological works. 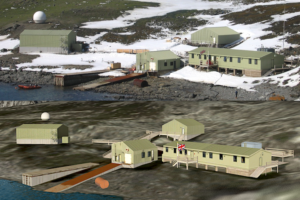 Initially operated year-round, since 1995/6 the Signy Research Station (pic aside) has been open only from November to April each year.

If the VP8PJ DX-pedition will choose one of the hereby listed sites, they will be given a new WAP reference