Antarctic Treaty Inspections Programme Report 2014-15, shows at page 90 a visit jointly undertaken by the United Kingdom and the Czech Republic in accordance with Article VII of the Antarctic Treaty and Article 14 of the Environmental Protocol, done  on January 2015 by a group of observers  of the two Nations.

Near  Eco-Nelson WAP CZE-Ø1 (a nongovernmental Czech facility) there is a small Refuge approximately 1 km to the east of that facility, around a small headland and situated approximately 20 meters above a gravel and rock beach. 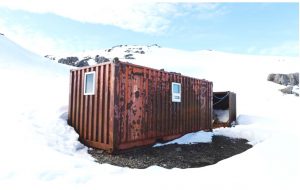 Located at 62° 15’ South, 58° 59’ West on Nelson island the Refuge consists of a shipping container, flanked by two smaller containers. The main building contains several bunk-beds, a large amount of assorted bedding and blankets and a small store of water bottles, fruit juice and medicine.

The Refuge  was linked to, or had been used by staff from, the Great Wall Station, China (WAP CHN-Ø1). The shipping container is in poor condition with extensive rusting and exterior deterioration. A large, apparently empty, rusting gas cylinder was being used to hold the door closed.

A smaller container adjacent to the main building held a collection of waste material. The door to this structure had rusted away completely leaving the contents open to the snow and wind.

A third small container lay approximately 10m to the east and was partially filled with snow. This contained a half-full 200lt blue plastic fuel barrel, apparently containing a heating and cooking fuel such as white spirit.

The visitors’ book in the shipping container indicated that this refuge was occasionally visited by those living in the nearby vicinity, including from the Eco-Nelson facility, and it contained relatively recent entries. However, the refuge was now in very poor condition, and without adequate supplies, was not in a suitable state to act as a genuine refuge in case of a serious emergency or accident nearby.

At the light of these evidences, Stansbury Peninsula Refuge, 62°15′ South, 58°59′ West, Stansbury Peninsula, of Nelson Island,  between Edge Bay and  Fildes Starit, King George Island in the South Shetland Islands,  will enter  into the WAP-WADA Directory as WAP CHN-NEW.

As soon as an HF  Ham Radio operation from this location will  maybe on air  a relater reference number will be given.