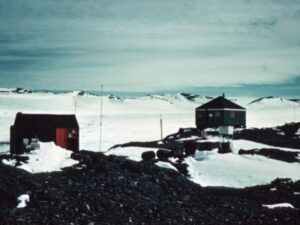 It was the location of the British research Station “V”, which was active intermittently from June 3, 1953 to November 25, 1963 and called Seal-catcher’s Arms or View Point Hut, with the intention of searching in the survey, meteorology and geology. Established as a satellite base for Hope Bay (Station D) WAP GBR-Ø4 , the construction of the first hut started on June 3, 1953, the second was established on March 20, 1956. 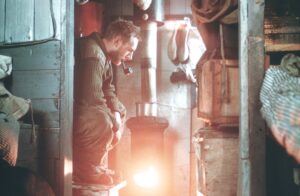 View Point, situated 6.79 km east of Skomlya Hill and 6.45 km southeast of Boil Point  was discovered by a party under J. Gunnar Andersson of the Swedish Antarctic Expedition 1901-04. So named by the Falklands Islands Dependencies Survey (FIDS) following their survey of the area in 1945 because from this promontory, good panoramic photographs were obtained.
Picture aside (1956) shows  interior of old Base “V”  hut at View Point,  Thanks and credit:  BAS archive (Photographer: Hugh Simpson, medical officer; Archives ref: AD6/19/3/D25)