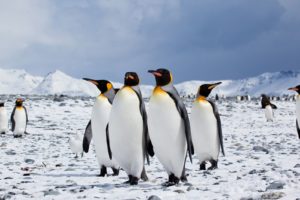 In a new study published in the journal Biological Conservation, an international team of researchers recommends the need for additional measures to protect and conserve one of the most iconic Antarctic species – the emperor penguin (Aptenodyptes forsteri).
The researchers reviewed over 150 studies on the species and its environment as well as its behavior and character in relation to its breeding biology. Current climate change projections indicate that rising temperatures and changing wind patterns will impact negatively the sea ice on which emperor penguins breed; and some studies indicate that emperor populations will decrease by more than 50% over the current century. The researchers therefore recommend that the IUCN status for the species be escalated to ‘vulnerable‘; the species is currently listed as ‘near threatened‘ on the IUCN Red List. They conclude that improvements in climate change forecasting in relation to impacts on Antarctic wildlife would be beneficial, and recommend that the emperor penguin should be listed by the Antarctic Treaty as a Specially Protected Species.
More info at: https://eurekalert.org/pub_releases/2019-10/bas-srs100819.php