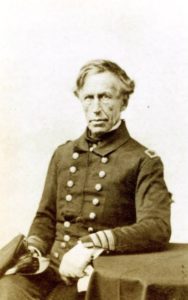 It’s been 180 years since Charles Wilkes (April 3, 1798 – February 8, 1877) an American naval officer, ship’s captain, and explorer led the United States Exploring Expedition, 1838-1842. He voyaged to the Antarctic continent and his journey has never been more relevant!

The early-1900s exploits of intrepid explorers like Robert Scott and Edward Shackleton captured the public imagination. With the benefit of cameras and deft handling of newspaper media, the Edwardian British explorers, alongside their Norwegian rival Roald Amundsen, established themselves as heroic polar pioneers. In the process, however, the south polar exploits of their American forerunner, Charles Wilkes, have been largely forgotten.

It was the round-the-world expedition by Wilkes, whose scientific collection constituted the first treasures of the infant Smithsonian, that first established the continental dimensions of Antarctica. But in a twist of 19th-century international politics, that claim to Antarctica was denied to the Americans by the pole-hungry British. Fast forward to today, and the United States finds itself in another nationalistic race to capitalize on the frozen southern continent. This time, its sparring partner is China. 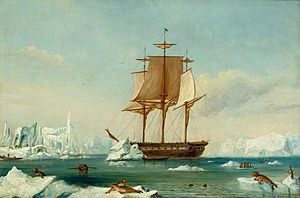 Amundsen might have been the first man to reach the South Pole, in 1911, but the discovery of the Antarctic continent occurred several generations earlier. In January 1840, when Wilkes was commander of the United States Exploring Expedition, he charted 1500 miles of the east Antarctic coastline in his flagship U.S.S. Vincennes (picure on the right, shows the  19th-century painting, based on a sketch by Lieutenant Charles Wilkes, USN, depicting USS Vincennes in Disappointment Bay, Antarctica, circa January–February 1840).

Before this American expedition, only small, rocky outcrops of Antarctica had been sighted. Most exploreres believed an open polar sea or, at most, a scattered archipelago lay at the planet’s far south.