Something interesting about Antarctica,  are certainly the illustrated cards which has become a rarity for collectors. The “fashion” of advertising one’s products spread by giving buyers different types of gadgets has been followed a lot and the Liebig cards are a typical  example. 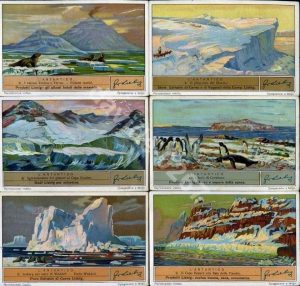 A friend, sent WAP a set of small illustrated cards with Antarctica theme. We made some investigation and discovered that this one,  came out in 1936 published by Liebig. This company, did print  1871 series of small cards with different subjects, most of which consisted of six juxtaposed images. This collection of advertising trading cards consists of the colored lithographed cards found on the packaging of the products. The production of these cards started in 1870 and ended in 1975, spanning more than 11,000 different types of cards. The last lithographed series were released in 1939, but series were edited and reproduced through the 1970s. The cards were divided into subjects that nearly always made up a set of six or twelve.

The series of cards were produced in multiple countries, therefore the cards can be found in a multitude of languages. Belgium, France, United Kingdom, Spain, Germany, and Italy are just some of the countries in which these were produced.

Birth and history of Liebig cards

Liebig cards originate around the middle of the 19th century. In this period in France the “fashion” of advertising one’s products spread by giving buyers different types of gadgets – mostly of the cards, were printed in black and white or in color using the lithographic technique.

Usually these stickers represent the most varied scenes and at the same time promote a certain product, either directly in the cartoon, or on the back with written or direct advertising messages. At that time, very few companies could afford such a form of advertising. Baron Justus Von Liebig chooses to adopt the small cards system himself to promote his meat extract, first giving them to customers and then distributing them through a real point collection.

On the rear side of each of this cards, there is the description of the subject, do we have:
Erebus and Terror vulcanoes and elephant seals

Crushing of the ice at Cape Crozier

Icebergs in the Weddell Sea and Weddell seals

Cape Renard to the Bay of Flanders

TNX Mr. Polato of the Salesian School in the town of Lombriasco –Turin, Italy-