Hams around the world seem to have discovered the interest in various Awards connected with the 6Øth Anniversary of the Antarctic Treaty Signature. 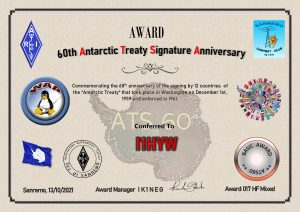 Just take a look at the numbers of Awards issued by the various Countries that have join the initiative, to realize this!

Russia in the lead, followed by Germany, Italy and Switzerland.

We may ask ourself a question: Where does this desire to put an Antarctic diploma in our shack come from?

Surely from the sensitivity of the Amateur Radio population to the issues related to Peace, Scientific research, to the fact that Antarctiva is a place where weapons are banned and … last but not least, the desire of every DXer 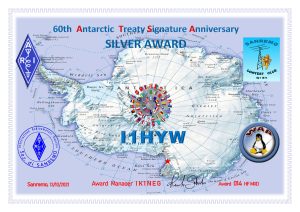 to log a QSO with the Continent that has always fascinated us, and to which,  the most exciting pages of the South Pole exploration are linked.

In this context, WAP has been protagonist for over 40 years , with its Antarctic Directories , but also withy his commitment and .. why not, with his Diplomas. 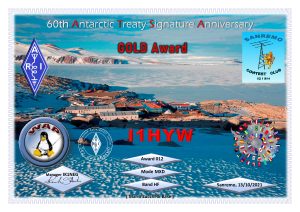 Returning to the 6Øth ATS (Antarctic Treaty Signature), ARI Sanremo  ARISanremo – Associazione Radioamatori Italiani  … who doesn’t know the wonderful city of Sanremo? … has so far issued over 100 of these Awards!

To the various OMs  of this ARI (Italian Amateur Radio Association) Group,  who deal with the management of these Diplomas (issued free of charge to the Hams WW who request them), certainly we deserve the applause and our Thanks!