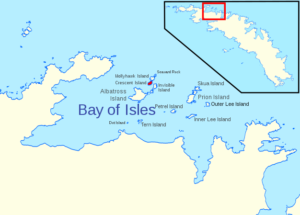 A small expedition consisting of W. N. Bonner and B. Stonehouse, funded by Falkland Islands Dependencies Government and administered by FIDS, did allocate letter ”N”  to the station set  at 54°03’South, 37°23’West, at Ample Bay, Bay of Isles, South Georgia . The initial though, even if that was later considered a private expedition, Station N (1) was set to study Biology and was occupied from 1953 through 1955. 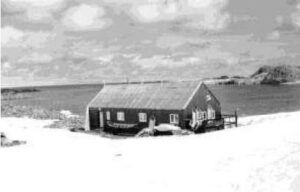 On Anvers Island, the British Antarctic Survey built and operated a Station (Base N “2”) Anvers Island at Arthur Harbour, 64°46’ South, 64°05’ West,  with purpose of  survey and geology. (Pic aside show the Base as it was in 1955)

Thanks and credit to: https://www.bas.ac.uk/about/about-bas/history/british-research-stations-and-refuges/anvers-island-n/ 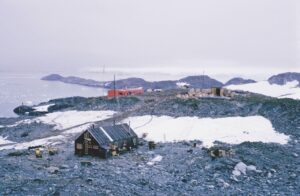 The Hut at Station (Base N “2”) was loaned to the U.S. Government on July 2, 1963, which converted it into a biological laboratory and added a new building (the red one on the pic aside) in January 1965 for use by American scientists at the nearby Palmer Station. 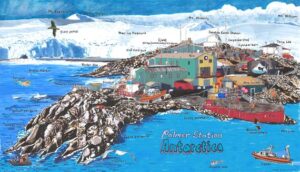 “Old Palmer”  (WAP USA-33) built about 1965, was about half a mile to the northwest adjacent to the site of the British Antarctic Survey “Base N”, built in the mid-fifties. The site is on what is now known as Amsler Island. Rapid recession of the ice due to global warming revealed Amsler Island as a separate island in 2004.

Amsler Island was the original site of the United States Antarctic Program research base Palmer (Old Palmer, WAP USA-33) from 1965 until the current station approximately 0.8 km (0.5 mi) away was constructed in 1968. 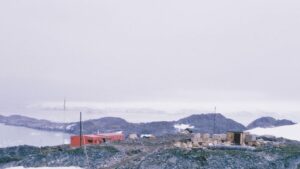 WAP USA-33, “Old Palmer” (Pic to the right) served as a base for those building “New Palmer”, which opened in 1968. Old Palmer was designated as an emergency refuge for the new station in case of disaster, though this perceived need disappeared over time. It was dismantled and removed from the Antarctic as part of the National Science Foundation’s environmental cleanup efforts in the early 1990s. According to Mehdi F5PFP, Old Palmer Station at Arthur Harbour  was active on air by KC4AAC 1963 &  KC4USP 1965 .

WAP did issue a separate reference to “Old Palmer Station” at Anvers Island/Amsler Island  11 years ago (2009) to recognize the two distinct evolution phases of the history of both Palmer Bases . 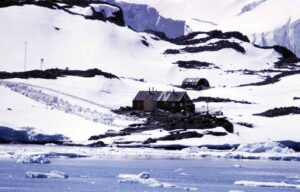 On 28 Dec 1971 the station has been destroyed by fire while being renovated by BAS. Debris was removed by the members of the US Antarctic Program in 1990/91. Only concrete foundations remain.

Air operations have been transferred to Adelaide (Station T) WAP GBR-13 in 1973 when the skiway found deteriorated.