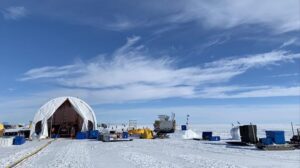 Few days ago, a traverse has left Scott Base (WAP NZL-Ø1), with a  Team of six  for a 1200km journey across the Ross Ice Shelf to the Siple Coast, where they’ll drop stores for scientists who will camp there! Click the button below, to see a short video

Drilling for climate, ice and ocean history’s Team will work at Siple Coast field camp (1000 km from Scott Base) where they will use hot water to drill through the Ross Ice Shelf, then sample the ocean below and recover sedimentary cores from the sea floor.

(See location 862AB on the map) This season’s main objective is to develop an understanding of the nature of the sea-floor sediments. Future retrieval of deep sediment cores will help inform multidisciplinary studies of the stability of the Ross Ice Shelf during past warm periods. Drill holes at the Siple Coat will also support the United States Icefin project. Icefin is an under-ice robot designed to explore ice-ocean environments here on Earth and ultimately on Jupiter’s icy moon named Europa.

Thanks and credit to: GNS Science, Victoria University of Wellington