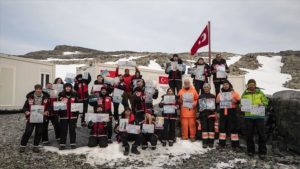 Antarctica, the coldest continent on earth, has served as a scientific research zone since the signing of a 1959 treaty. Recently, Turkey and Belarus signed an agreement that  covers scientific cooperation on environmental conservation and study of Antarctic geology; the cooperation on Polar research, happens  months after Turkey completed its third National Antarctic Science Expedition.

The agreement on scientific and technical cooperation in Antarctica was signed by Turkey’s Industry and Technology Minister Mustafa Varank and Vladimir Gusakov, the chairman of the Presidium of the National Academy of Sciences of Belarus.

Covering cooperation on topics of joint research about the Antarctic as well as exchanges between the countries’ scientists and experts, it prioritized environmental conservation and the monitoring of human impact and pollution on Antarctica.

Earlier in February, a Turkish team traveled to Antarctica as part of a research expedition and spent 30 days in the frozen continent.