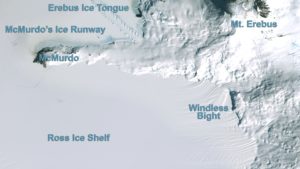 Windless Bight (77°42’00”South, 167°39’48” West) is the prominent bight indenting the South side of Ross Island Eastward of Hut Point Peninsula.

A field team, equipped with standard remote field equipment (including snowmobiles, PistenBully, and Mattrack vehicles) stays over there  in this self-supporting field camp several weeks a year.

The camp  consists of two Polarhavens and six individual mountain tents. The team  remains at the field site but will intermittently return one or two team members to McMurdo Station for supplies and overnight stays. The USAP also provides year-round on-site support from a support contractor research associate (RA), who occasionally visits the site during winter months for maintenance and troubleshooting.
Read more at: https://www.usap.gov/scienceSupport/sciencePlanningSummaries/2018_2019/results.cfm?formAction=detail&ID=199

Windless Bight Field Camp will be add to the WAP-WADA Directory to appear in the next update. So far no ham radio activities have been performed from this site. If it will happen, a new WAP Reference will be given.