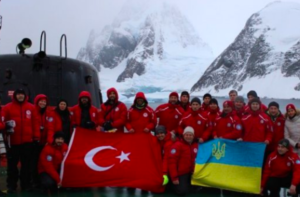 TurkishTeam visits 9 foreign research bases, including Spain, Britain and Russia
Turkish scientists stationed in an Antarctic polar research base paid a visit on Monday to other countries’ research installations.

uld work two months in the Bulgarian Base to investigate different types of volcanic rock.
Earlier in February, a Turkish Team traveled to Antarctica as part of the Third National Antarctic Science Expedition to spend 30 days, which is supported by the Turkish Presidency, the Industry and Technology Ministry, and ITU’s Polar Research Center, along with other Turkish universities.
In April 2016, the first-ever Turkish team of researchers — including doctors, botanists, geologists, and oceanographers from seven universities — traveled to Antarctica to study the impact of climate change. Antarctica, the coldest continent on earth, has served as a scientific research zone since the signing of a 1959 treaty.