Day by day, several Hams from different nations are showing up with Special callsigns to join the 6Ø years Anniversary of the Antarctic Treaty Signature.

On the mean time, related Award Programs are in process and will be released when the activity will jump into the central phase (indicatively  mid October) of the Anniversary. 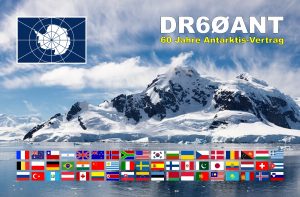 The Germans are almost ready and since last July have already start their activity. The two German special callsigns DR6ØANT and DQ6ØANT are part of an international campaign commemorating the 6Øth anniversary of the entry into force of the Antarctic Treaty. 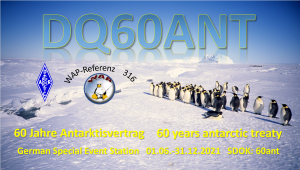 This station is organized by a team around Karsten, DL1RUN.

In the late 1980s, the club station at Mittweida University accompanied Volker’s Anarctic expedition, DL8JDX. Regular skeed did not break the contact with the homeland. Read more on the topic …

An interesting Award Program is in process and will be launched shortly by DL1RUN.