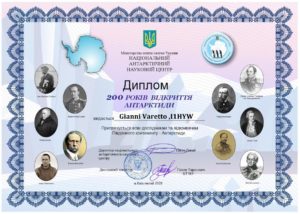 Two Special Ukrainian event stations EM2ØØANT WAP-305 & EN2ØØANT WAP-306 are on the air to celebrate the 200 years of Antarctic exploration.  QSL for both of the calls,  via UT1KY

EN2ØØANT and EM2ØØANT will be active during the 17th Antarctic Activity Week officially on air from February 10th and ahead. More info at: http://www.waponline.it/antarctic-activity-week/aaw-2020/

Pavlo informs WAP that  1 QSO with Antarctic SES EN2ØØANT or EM2ØØANT will qualify for the Special Award issued for this Anniversary.
For more informations, contact UT1KY via e-mail  ut1ky@ukr.net

What is the role of the Ukrainians to the discovery of the Southern Continent?
Ukraine’s catch-up to Antarctica’s discovery is the deputy captain (Tadeusz Bellingshausen), that is, Lieutenant-Captain Ivan Zavadovsky, a native of Hadyach, of the Cossack lineage. When Elizabeth received the so-called “Little Russian nobility”.
Still worth mentioning is Anton Omelchenko, a member of the British Antarctic Expedition of 1910-1913 on the Terra Nova barge, headed by Captain Robert Falcon Scott, who set out to “achieve the South Pole in order to honor this grand accomplishment of the new century” Anton Omelchenko is a member of the Royal Geographical Society,
Omelchenko received the award, like other members of the expedition, from the hands of the English Queen. It was a medal honored for the feat of the pioneers of Antarctica, and a lifetime pension. Omelchenko was assigned a lifetime pension, which he received until 1927, until diplomatic relations broke up between the USSR and the United Kingdom.
Onuk – Victor Ivanovich Omelchenko, diesel engineer, participant of the 3rd Ukrainian Antarctic expedition (1998-1999)

Pavlo reminds the Antarctic chasers that several copies of his book “Antarctica is the sixth continent” are stillavailable on request ( see UT1KY on QRZ.com to get all details on how to get it)