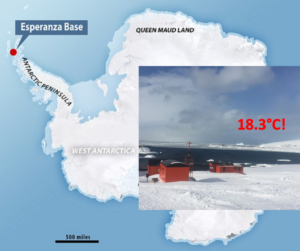 On Febr. 4th 2020 the Argentinean Esperanza Base (WAP ARG-Ø4) in Antarctica, recorded its hottest day on Thursday.18.3°C!

The  new highest temperature was  recorded on the northern tip of the Antarctic Peninsula, at 63°23′ South by the instrumental devices at Esperanza Base.

The  previous record was 17.5°C set in March  2015 in the same site also at Esperanza,  where the station’s data recording  goes back to 1961 by Servicio Meteorológico Nacional- Argentina
photo credit: Nestor Franco