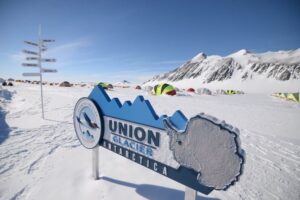 Ale Antarctic Logistics & Expeditions manage several sites in Antarctica. One of those, is Union Glacier Camp at 79˚46’South,  82˚52’West, located in Ellsworth Land in Antarctica.

The camp is the only private seasonally occupied camp which sites in the Heritage Range, below the Ellsworth Mountains, on the broad expanse of Union Glacier, that gives the camp its name.

Union Glacier Camp is only accessible by air and lies on the broad expanse of Union Glacier in the Southern Ellsworth Mountains.

Union Glacier Camp is the only facility of its kind in Antarctica. Full-service private camp operates during the Antarctic summer (November through January) and is dismantled at the end of each season. The camp does not only provides accommodations to guests on guided experiences, but also serves as a logistics hub, supporting private expeditions and National Antarctic Programs. 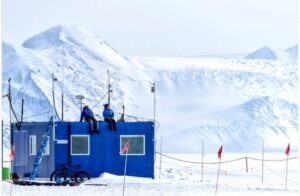 Antarctic Logistics & Expeditions LLC (ALE) offers air transportation, logistic support, and guided experiences for those venturing to the interior of Antarctica. In 1985, our predecessor, Adventure Network International (ANI), pioneered private flights to Antarctica for an ascent of Mount Vinson. More than 30 years later, ALE remain the most experienced private operator on the continent with an impeccable safety record, a strong environmental ethic, and a desire to share the white continent with other passionate explorers.

WAP and Radio amateurs WW,  hope that some day  an HF Radio room and antennas could be set down there, to give more opportunities to the eventual HAMs wishing to travel in this fantastic and spectacular site!

For now,  Union Glacier Camp has been add to the WAP-WADA Directory and referred as  (WAP MNB-NEW)