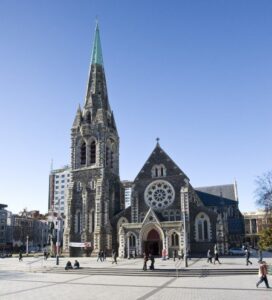 Christchurch in the Southern Island of New Zealand is an outpost, an ideal location to jump down South, in Antarctica. WAP wish to recall that in 2011, a 6,3 magnitude earthquake struck Christchurch. The quake caused considerable destruction, and the Christ Church Cathedral suffered major damage to its facade, western porch, and adjacent walls. Its 118-foot tower and 88-foot spire also collapsed.

It took 40 years to build the Christ Church Cathedral; the cornerstone was laid in 1864 and construction completed in 1904. The building has served as a historic place of heritage, a sacred place of worship, and a civic place of gathering. With its demise, the cathedral signified a broken city.

Christchurch, New Zealand is an Antarctic Gateway City, one of only five in the world. 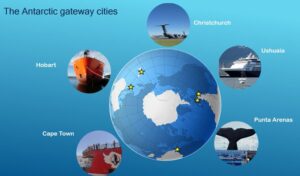 The role of the Christchurch Antarctic Office is to co-ordinate the opportunities presented by Christchurch’s Antarctic Gateway status and to explore our historic and modern connections with the icy continent.

As Sir Edmund Hillary noted: «Much of the history of Antarctic exploration

has flowed through Christchurch, starting over 100 years ago with the “Heroic Era” explorations of Captain Robert Falcon Scott and Sir Ernest Shackleton, who both used Christchurch as a base camp for their Antarctic expeditions».

Actually, around 100 direct flights a year leave from Christchurch airport, carrying more than 5,500 passengers and 1,400 tons of cargo, including fresh food.

Nobody owns Antarctica. The Antarctic Treaty was signed on 1 December 1959 by 12 countries (now 49 nations) designating the Continent as a natural resource devoted to peace and science.