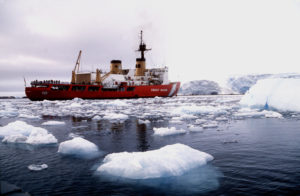 The crew of the Polar Star, the only operable U.S. Heavy Polar Icebreaker, had completed this season’s annual resupply mission to Antarctica despite a bevy of difficulties: an electrical system began smoking, one of two evaporators used for making drinking water broke, a shaft on the propeller began leaking, and there were ship-wide power outages.

After resupplying McMurdo Station, the Polar Star began her 11,200-mile journey back to the dry dock in Seattle.

But she only made it about 650 miles north of McMurdo Sound before another incident struck.

At 9 pm on Feb. 10, a fire broke out in the incinerator room. The crew tried to put it out with four fire extinguishers, but that didn’t work. Fire crews continued battling the blaze for nearly two hours before they were able to put it out. No one was injured.
Read more at: https://www.arctictoday.com/the-only-u-s-heavy-icebreaker-catches-on-fire-returning-from-antarctica/?fbclid=IwAR1YTRF_tuzJZt2oVusEWHv2xqEdO2YadmLQY97D-GHa4Vc-I100inQ1Dj0