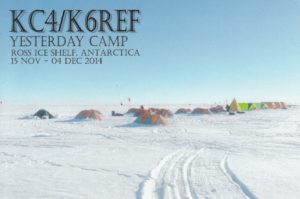 WAP and the Ham’s Antarctic Community are grateful to Dr. Ron E. Flick K6REF, for the New WAP Reference, USA-44 issued after his activity from the US  Yesterday Camp.

Here is a brief story told by Ron, K6REF, when he did come back home after his season in Antarctica.

Returned from Antarctica on schedule tired and sore (with wrist problems that should resolve) after many hours of flying! We deployed over 30 seismometers over the Ross Ice Shelf to measure ocean swell-induced vibrations, and to determine the structural properties of this largest ice shelf in the world. Ham radio was part of the public outreach for this National Science Foundation (NSF) sponsored project.

I was able to operate from the McMurdo Ham shack (KC4USV,  WAP USA-21) with about 450 contacts between 5 and 13 Nov 2014. We spent that time there training and getting equipment ready, and waiting for weather suitable to fly to the field camp. 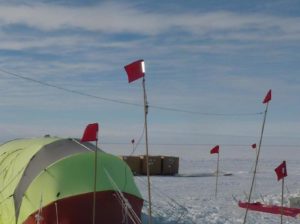 We camped at Yesterday Camp in amazingly cozy mountain tents for 19 days. We had several larger heated work and eating tents as well, and after a few days the cold didn’t seem so bad! The temperature was about -25°C (-13°F) when we arrived, gradually warming to a balmy -10°C (+14°F) by the time we left. We drank some beer outside once during a cold snap, and by the time I got half my can empty the rest was turning into frozen slush!

I operated from Yesterday Camp as KC4/K6REF between 18 Nov and 3 Dec 2014, making about 150 contacts in 27 countries and 23 US states. I used my Yaesu FT847 barefoot with a simple wire dipole mounted on flag poles about 8 feet off the ice. Conditions were often frustrating with one-way in propagation. I spent almost an hour trying to reach TY2CD in Benin (where there are only two licensed amateurs), all the while hearing Wynand at 58, but with him utterly unable to hear me. There were a few pileups, especially from European stations eager to log a once-only Antarctica contact. Picture above show the science tent QTH shack with diplole antenna on flag poles.

Thanks for all the QSOs, and apologies if you could not get through! I’m especially grateful to Bill K7MT and Bob K4MZU for their relay help and general support, and to Bob KK4KT and Roy KR6RG for their perserverance  and the timeless (old fashioned) phone patch to my wife Myra (boy, was she surprised!). Also thanks to Joe AB6RM for posting a publicity piece in QST and to many other hams who spotted KC4/K6REF on the DX sites!

QSLs  for KC4/KC6REF (Yesterday Camp WAP USA-44) have to be requested  to:

For more information on the science see: https://scripps.ucsd.edu/centers/iceshelfvibes/taking-the-pulse  and the pages linked from there .