Antarctic shelters are facilities open to all countries, to be used in cases of emergency or to support activities in the field. They are equipped with food, fuel (there are with generators and communication equipment), accommodation facilities and other logistics. On  King George Island (aka Isla 25 de Mayo), just to the South of Argentine Base Carlini ,WAP ARG-20 (ex Jubany Base) on Potter Peninsula  there is a Special Protected Area  (ASPA 132) which extends from Potter cove to Stranger point.

Outside the zone, there is a small shelter, called Albatros, on the cliff which looks towards the coastline, about 50 meters high from the beach and less than 1 Kilometer from the Elephant shelter, in the E-SE direction. 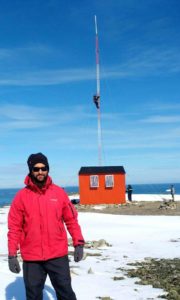 Ham radio activity from Albatros Refuge (pic above, WAP ARG-27) have been performed recently for a very short time on March 2016 by LU4AA/Z operated by Juan Manuel Pereda LU4CJM  (see pic aside). 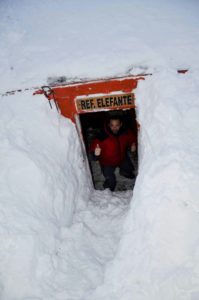 field, allowing the geo-location of them in real time and a coverage of more than 35 kilometers.

Another Refuge nearby is Elephant Hut (pic to the left);  it is located about 1000 mts from Punta Stranger, in the northwest direction. It is usually used by research groups as a resting point. The shelter occupies an area of about 25 square meters and has capacity for two people. Elephant refuge still remains a brand “New One”!