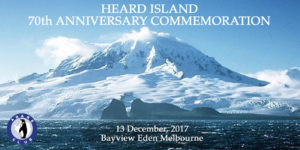 VI7ØHI will be active on all HF bands 160m-10m, SSB, CW, RTTY and possibly digital modes until Feburary 28th 2018 and will join the 15th Antarctic Activity Week.  (Please note that this activity is from mainland Australia OC-001 and NOT from Heard Island).

A special commemorative QSL card will be available after completion of the activation through ; Charles Wilmott MØOXO who is  the official QSL manager. https://www.m0oxo.com/oqrs/logsearch.php OQRS will be available and also LOTW. 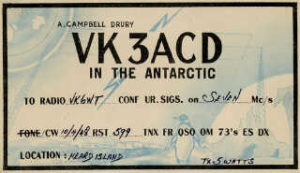 dog run, and a large tractor. These men carried out meteorological, geophysical, upper atmosphere, and biological research, a program that continued for 7 years until the base was abandoned. Since 1969, ANARE has visited Heard Island every few years, mostly to check up on the ruins of the original encampment.

The first amateur radio contact was made in 1947 by Arthur Campbell-Drury who signed VK3ACD/Heard. During the following 3 years, a total of only 36 contacts was made (See QSL aside)