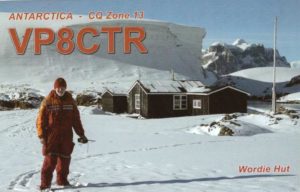 Hans wrote: – The QSO was in spring this year (2019) from Wordie Hut on Winter Island, but there is no reference or note on the card about WAP. Any reason for missing that?-
73, Hans DL6JGN

Wordie Hut established on 7 January 1947, is an early British scientific research Station which was mainly used for meteorology research. It was named in honor of Sir James Wordie the chief scientist on Shackleton’s Trans-Imperial Antarctic Expedition of 1914-1917, The Hut, set on Winter Island (65° 15’ South, 64° 16’ West), an island 900 m (980 yd) long, lying 200 m (220 yd) north of Skua Island in the Argentine Islands, Wilhelm Archipelago, off the west coast of Graham Land, Antarctica was named a Historic Site and Monument in 1955 and is today maintained by the UK Antarctic Heritage Trust.

The hut stands on the foundations of an earlier building, used by the British Graham Land Expedition from 1935–36. The original hut was destroyed in 1946; possibly by a tsunami. It consists of the kitchen and living room, generator shed, office, dog room and toilet, and a number of original artefacts are still found on site.