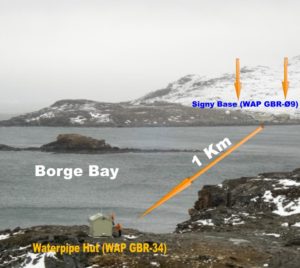 Where exactly are VP8PJ‘s planned to stay when at the South Orkneys DX-pedition?

Now we know it. The information is on https://sorkney.com/equipment/  :
Location:

We will be located on Signy Island in South Orkney Island Group. Our camp will be near the Waterpipe Hut near Waterpipe beach. The general terrain is a bluff near the ocean that is 10 to 20 M above the sea with over water path to EU.

It was installed in 1999/2000 as a refuge hut and visited regularly by BAS personnel from Signy Station. Food and fuel  for any eventuality, are stored in the hut