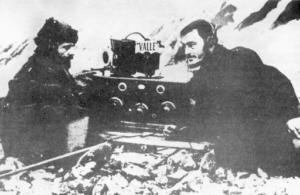 On March 30, 1927, the Navy’s Petty Officer Emilio Baldoni managed to contact Ushuaia, inaugurating the Orcadas Radio Station (LRT), first in Antarctica. Until then the staff remained in communication with the rest of the world for a year until the arrival of their replacements. The Antarctic Naval Command is the organism of the Argentine Navy on which the Orcadas Base  (WAP ARG-15) currently depends.

Since February 22, 1904, Argentina has been present on the white continent with the creation of the Orcadas Antarctic Base, the first of the permanent wintering and temporary bases, Antarctic shelters, camps and scientific stations.