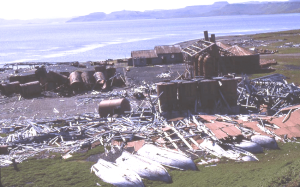 Nearly 15 years ago, a major restoration project had been taking place at the old abandoned whaling station at Port Jeanne d’Arc. This had been built late in the 19th century by a Norwegian company and abandoned early last century when factory ships made land-based whaling uneconomic. For years the weather and vandalism had been destroying the station, until Jean-François Le Mouël convinced the administration of TAAF  that it should be preserved. 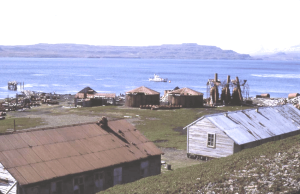 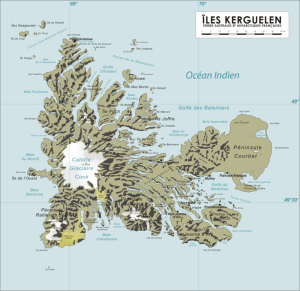 Here below an abstract of the history:

The exploitation of marine resources on the Kerguelen Plateau only began in 1790 (18th century) after the discovery of the northern Kerguelen Islands in 1772. Salted fur seal (Arctocephalus gazella) skins was the first product to be commercialized by Nantucket (USA) and London (UK) ship-owners, mainly on the Kerguelen Islands, and by the early 19th century the seal colonies were decimated.

Exploitation of marine species on the Kerguelen Plateau began soon after the discovery on 13th February 1772 of the northern Kerguelen islands by the expedition of Y.J. de Kerguelen de Trémarec with the Gros Ventre and the Fortune.
The first sealing voyages (1791-1793) were reported from the United States of America and United Kingdom twenty years later. For more than 50 years during this early period, sealing occurred only around the Kerguelen islands. It was only with the development of whaling and sealing voyages in the region that sealers from the north-eastern coast of the USA discovered the second and southern sealing ground on the plateau, Heard and mcDonald islands, during the 1853-1855 cruise of Corinthian.
The exploitation of marine resources on the Kerguelen Plateau only began in 1790 (18 th century) after the discovery of the northern Kerguelen islands in 1772. salted fur seal (Arctocephalus gazella) skins was the first product to be commercialized by Nantucket (usa) and london (uK) ship-owners, mainly on t Phase 1, 1908-1911: the whaling station at Port Jeanne d’Arc and the Mangoro campaign (1910).
A 50-years exclusive licence was granted to the Bossière brothers by the French government in 31 July 1897 for the exploitation of the Kerguelen Islands. During the rst period (1908-1911) they transferred the rights to two companies, Aktieselskabet Kerguelen and Société des Pêcheries de Kerguelen (Arnaud and Beurois, 1996).  Storm, Bull & Co. which was active from 1908-1911 established a whaling factory station at Port-Jeanne d’Arc in Morbihan Bay.

The oil carrier Jeanne d’Arc (76 m, 1332 t) and three whale catchers (two sister ships Espoir and Éclair, 51 m, 540 t, and Etoile, 30 m, 165 t) were linked to the station. The total whale catch resulting from this activity was 442 whales (95% humpback, the balance right whales). Their best year was in 1908 when 232 whales were caught and a total of 13 760 barrels of oil were produced. Activity progressively shifted to hunting elephant seals with peak production in 1911 of 10 680 barrels and a total production of 17 000 barrels of oil. However, the activity was not profitable enough and the station fell into disuse.

Read more at: History of whaling, sealing, fishery and aquaculture trials in the area of the Kerguelen Plateau | French Ichthyological Society – Cybium (sfi-cybium.fr)