Antarctica is owned by no one, but there are plenty of countries interested in this frozen island continent at the bottom of the Earth. While there are some regulations on who can do what there, scientific research has no definition in Antarctic law. So any research by a country conducted in or about Antarctica can be interpreted as legitimate Antarctic science.

There are 30 countries operating bases and ships, and flying aircraft to and from runways across the continent. Russia and China have increased their presence in Antarctica over the past decade, with China now reportedly interested in building its first permanent airfield.

It is not surprising there is significant interest in who is doing what, where – especially if countries ramp up their investment in Antarctic infrastructure with new stations, ships or runways. Their actions might raise eyebrows and fuel speculation. But the freedom of countries to behave autonomously is guided by the laws that apply to this sovereign-neutral continent. 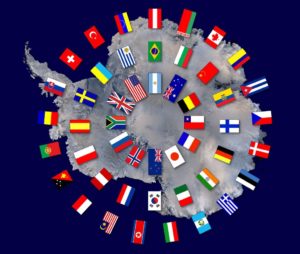 There are 12 original signatories to the 1959 Antarctic Treaty,  and they do not have to prove their commitment to the treaty since they wrote the rules. Another 41 countries have signed on since 1959, and they do need to prove commitment. The Scientific Committee on Antarctic Research (SCAR) coordinates Antarctic research, but being a member is not a prerequisite for doing Antarctic science.

Currently there is only one jointly operated scientific base – Concordia (WAP MNB-Ø3), occupied by both France and Italy.
The Novolazarevskaya airfield (Blue One runway,  WAP MNB-Ø6) is a joint operation coordinated by Russia. This encouragement was designed to reduce the potential for expansion of the footprint of human activities. In 2017 the Consultative Parties adopted revised guidelines for how to become a decision maker. These outline new rules on a concept that has never been articulated publicly in an Antarctic forum before – evaluating the quality of scientific research. This could put the brakes on the rapid addition of new signatories to the table.