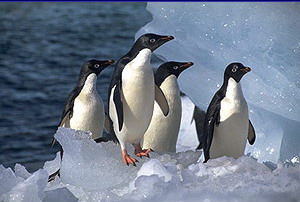 Penguin populations are usually associated with the polar ice caps, most likely originating from Antarctica. A team of scientists from Berkley University of California  has determined that penguins first lived in Australia and New Zealand nearly 22 million years ago.
The new study has been published in the Proceedings of the National Academy of Sciences journal. Collaborating with several other universities and museums, the team analyzed the origins of 18 penguin species.
According to the paper, “the penguin crown-group originated during the Miocene period. Penguins first occupied temperate environments and then radiated to cold Antarctic waters.”

Blood and tissue samples allowed scientists to trace back how penguins became diverse throughout millions of years, and how they moved south to Antarctica. They believe that the emperor and king penguins left their ancestors and migrated to Antarctica due to the abundant supply of food available. These two specific penguin species have caused experts to debate about where they fit in the penguin family tree and are believed to belong to a ‘sister group