Whichaway camp (built in 2010) is unique and the perfect base from which to start your adventure. Having won the World Travel Awards five times, the camp is also designed with a minimal environmental footprint in mind.
Whichaway Camp at  70° 45′ 49″ South, 11° 36′ 59″ East,  is in the Schirmacher Oasis at the lake Podprudnoye. 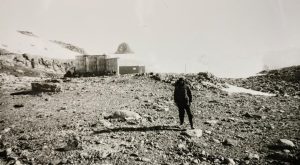 Dr. Volker Strecke DL8JDX  (Antarctic veteran) sent WAP a couple of interesting pictures showing that Whichaway Camp is  exactly located at the same position where the Georg Forster Hut  at 70°46′ South,   11°37′ East  was until 1993.
This aside, is how this place looked in 1989: 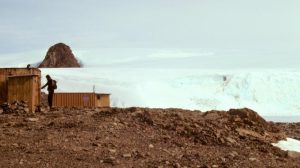 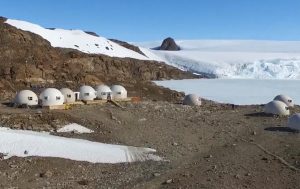 Picture on the left, shows the same site how it looks today.
Now it is called Whichaway Camp (WAP MNB-11):

In addition, Volker says that,  as far as he knows ,  at  Lake Prilednikovoye Hut and Lake Podprudnoye Hut (DDR-NEW listed on WAP-WADA  Directory ) ,  there were no Ham radio activities from these huts. Since 1996 both huts do not exist anymore. Together with the dismantling of the Georg Forster Station (WAP DDR-Ø1) from 1993 to 1996 these huts were removed.
The Huts will continue to remain listed on WAP-WADA  Directory  as a reliable trace of their presence on this related Antarctic site.
TNX Volker Strecke, DL8JDX (aka Y88POL & DPØGVN from 1988 to 1994)
1988-1989  Y88POL  Georg Forster Base  Schirmacher Oasis
1990-1992  Y88POL  Georg Forster Base  Schirmacher Oasis
1992-1994  DP0GVN  Neumayer II Base  Ekstroem Shelf Ice