Winter International Film Festival of Antarctica (WIFFA) is an annual film festival open exclusively to those who spend the entire winter in Antarctica or in Subantarctic areas.
The festival was held for the first time in McMurdo (WAP USA-22) & Scott Base (WAP NZL-Ø1) in 2006 and 2007 where is started the competition for the 48hr films locally at the two bases.
In 2008 eight stations participated, and for every year since then, both interest in the festival and the number of participants has grown.
The festival is for short movies, within 5 minutes of duration, and has two categories:

48-hour filming – usually takes place in the first week of August; on the day of the start of the competition the participating stations receive a list of the five elements that must be included; the film must be ready to be screened within the following 48 hours. 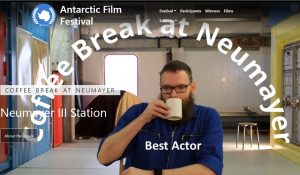 The five topics of the 48 Hrs are usually represented by a sound, an object, a character, an action and a quote. Five bases then choose within each of these general topics a specific element which will be communicated to all stations and which must be represented in the film (for example the sound could be the sound of an animal, the object a bottle, etc.).
Once the short films have been shot, they are sent and viewed by all the participating bases, which give a vote, thus deciding the best film for both categories, the best actor / actress, the best soundtrack, the best costumes and so on.

Watch the festival website and enjoy the past and recent  films at:  https://www.wiffa.aq

While waiting to see which one will be the best of the 2022 edition, WAP wish all the stations’s partecipants,  a wonderful game!