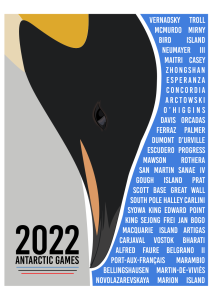 The Polies have just join the now-annual Polympics, that have involved the other Antarctic stations in the 2022 Antarctic Games.

The friends form Arctowsky Polish Antarctic Station (WAP POL-Ø1) did join the 2022 edition as well!
Winter is the time when Antarctic stations of different countries undertake various forms of cooperation and competition among themselves. Contrary to the intensive summer period, there is a little more time for this in winter. In July, the crew of the Henry Arctowski Station took part in the “Antarctic Games” sports competition organized by the Amundsen-Scott South Pole Station (WAP USA-21 and/or WAP USA-36). The joint initiative provided sports emotions, joy and the feeling that we are not alone in Antarctica.

Hope the WAP followers have already seen  the previous post, the one regarding the WIFFA (Winter International Film Festival of Antarctica) pubblished few days ago.  Well, Arctowsky is one of the several Stations that  intended  to partecipate.

Still follow film festival website https://www.wiffa.aq and enjoy it! It’s a nice oportunity to see how is the life in Antarctica on winter time!