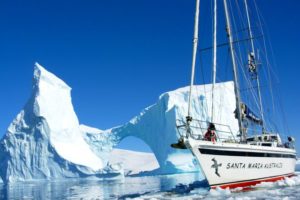 S/Y Santa Maria Australis  (aka S/V SMA)  is a 66 foot aluminium ketch built in Gdansk, Poland in 1998 and refitted in 2004 to endure high latitude sailing conditions, can accommodate up to a total of 12 people, frequently travelling on the Antarctic waters

In 2006, SMA-Expeditions reached the southern latitudes and has since, endured twelve Antarctic expeditions as of March, 2009. She has been designed and equipped for long distance cruising in comfort. 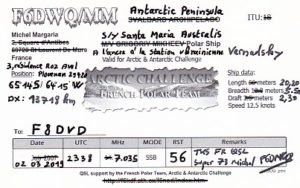 February and March 2019: Michel Margaria F6DWQ/MM was sailing the Antarctic peninsula.  Here below, a QSL of F6DWQ/MM transmitting from on board S/Y Santa Maria Australis when, on 02.03.2019,  he was just in front of Vernadsky station, Antarctica. QSL via F6DWQ