In the year of the 200th Anniversary of Antarctic Discovery, we must  highlight an important person and interpreter of the recent history of polar explorations. 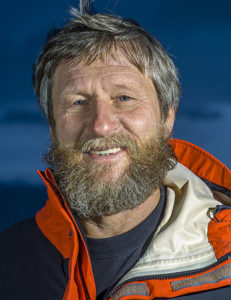 «Antarctica can serve as a model for all humanity today. It’s a Continent without national borders. It is governed by the Antarctic Treaty, which has been in existence for 60 years. This is a superb document, which gives Antarctica to the scientists, not to the military»
Viktor Boyarsky

Viktor Boyarsky is a prominent Russian traveller, Honored Polar Explorer of Russia, Chairman of the Polar Commission of the Russian Geographical Society (RGS), member of the National Geographic Society of the United States, full member of the National Tourism Academy and the International Academy of Refrigeration, Candidate of Science in Physics and Mathematics and member of the Union of In 1987, Boyarsky was sent as a Soviet representative to the International Trans-Antarctic Expedition, timed to the 30th anniversary of the Antarctic Treaty, which was signed by 12 states, including the USSR, and determined the status of the Antarctic as a continent of peace and cooperation.

In September 2002, the Russian President awarded Boyarsky with a medal of the Order “For Services to the Fatherland,” 2nd Class. In 2008, he received the Order of Boris Vilkitsky and the badge “Honored Hydrometeorology Professional” for his contribution to the development of polar science.