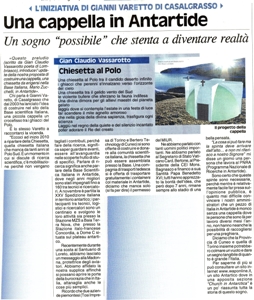 This is the title appeared on one of the oldest  and most popular newspaper of the Province of Cuneo, Northen Italy. Corriere di Saluzzo has just published an article about the Chapel in Antarctica, following an initiative launched seven years ago  by Gianni Varetto I1HYW (journalist and Ham radio operator), one of the founders of WAP (Worldwide Antarctic Program). The idea of building a chapel in the area of the Italian Research Base Mario Zuchelli Station  in Antarctica is still waiting the permission from the Italian Antarctic Dept. (PNRA) even if Pope Benedictus XVI has blessed it during a recent visit at “Madonna della Guardia” Sanctuary in the city of Genova.

It
is hard to believe that a little Chapel with a crucifix could be something that have to take years to be approved by the competent authorities, specially if founds are not necessary as donations have already been proposed by the Companies which have propose to donate it.

So Italy, the Country of the Roman empire, the site of the Vatican State, the cradle of the Christianity is so lazy to accept a donation of a little Chapel to be built on  the Icy Continent in an area where, several people are spending months away their families without a support of a spiritual place where going for a prayer!

We are keeping this  goal as a kind of challenge to achieve, by the Bless of Lord!