Javier Ramírez had only seen penguins on TV. That changed at 34 years old, on January 24, 2021, when he arrived on Deception Island, Antarctica. Upon landing on the frozen continent, some penguins would be the hosts, an image, which added to the sensation of -12 degrees Celsius of ambient temperature, will never forget. 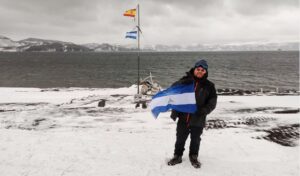 This 34-year-old is the first Nicaraguan at the “Gabriel de Castilla Base” (WAP ESP-Ø2), one of the two Spanish bases located on Decepción Island in the South Shetland Islands Archipelago, in Antarctica. There he saw how the Spanish military placed the flag of Nicaragua on the flagpole, along with that of Spain, a gesture that shocked him and filled him with pride.

Ramírez was part of the XXXIV Spanish Antarctic Campaign along with 17 other people, including soldiers and scientists. The mission, which is scheduled annually during the summer in that area of ​​the world, was coordinated by Dr. Manuel Berrocoso Domínguez, who has visited the continent since the first campaigns and is director of the Astronomy Laboratory of the University of Cádiz, of Spain, the place where the Nicaraguan is doing his doctorate in Computer Engineering.

Thanks and credit to : https://confidencial.com.ni/nacion/

Read the whole report at:  https://confidencial.com.ni/nacion/un-nicaraguense-en-mision-cientifica-en-la-antartida/?fbclid=IwAR0W6_PkGgIJLqqdLgQKGV3HPbl1npOw9NCRKaCRoRdSxhXOQqxH3AkK0KY