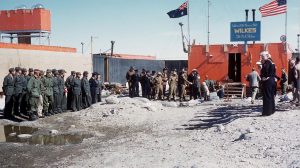 From Jan 1957 through 6 February 1959 Wilkes was a Multinational Base (WAP MNB-NEW) managed by USA & Australia, then,  after a hand-over ceremony held on 7 February 1959, Wilkes Station became Australian (WAP AUS-Ø5).

In January 1957, Wilkes Station was established on the Clark Peninsula by the United States as part of their International Geophisical Yera (IGY) program. Antarctica was recognised as an area of major scientific importance during IGY, with 12 nations participating with programs.

US Navy personnel constructed the main part of Wilkes in 16 days, unloading 11,000 tons of material and supplies. It took a crew of over 100 to erect the station, which housed 24 naval personnel and scientists for the next 18 months. At the closure of IGY, the United States offered use of Wilkes to Australia. 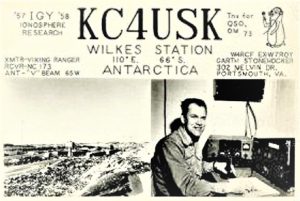 Wilkes was seen to be strategically located because of its proximity to the south magnetic pole. Under an agreement with the United States, Australia was permitted to use the station stores and supplies that remained, on condition that nothing was removed and that Australia through reported annually on consumption of stores and supplies.

From Jan 1957 through 6 February 1959 Wilkes was a Multinational Base (WAP MNB-NEW) managed by USA & Australia, then,  after a hand-over ceremony held on 7 February 1959, Wilkes Station became Australian (WAP AUS-Ø5).

As Wilkes had originally been built as a temporary station, rapid deterioration occurred in the extreme Antarctic environment. By 1964, the buildings had become a fire hazard due to fuel seepage, and the constant drift snow buried structures for most of the year. The deteriorated wooden buildings needed constant repair. 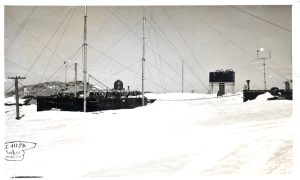 A plan to realise a new station Casey Repstat  (Replacement station) was developed on the other side of the bay. Repstat was commissioned in 1969 and Wilkes was closed.

Wilkes station is now almost permanently frozen in ice and is only occasionally revealed every 4 or 5 years during a big thaw.

Many objects remain embedded in the ice. Visitors are often able to see the remains of the station through the ice, seemingly exactly as it was left.