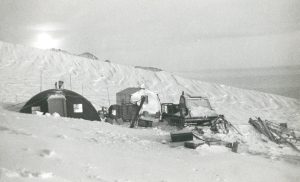 Borga Base was created with the support of Belgian aircraft during the International Geophisical Year and was inaugurated in 1969. Its main building was a Parcoll hut, a long hut with a semicircular frame resembling half a cylinder.

In the years of its operation (the main research activities of Borga Base were geological surveying and weather monitoring), expedition teams would attempt the traverse from SANAE to Borga Base using specialized tractors, though they were not always successful. In 1969, mechanic Gordon Mackie was the first casualty of South African Antarctic research when he fell to his death on the traverse between the two bases. In 1970, mechanical and weather difficulties forced the team to abandon their attempt to reach Borga. In 1971, mechanical issues once again prevented the team from reaching Borga Base so they created , another semi-permanent station (Grunehogna Base WAP ZAF-NEW), using a prefabricated hut. 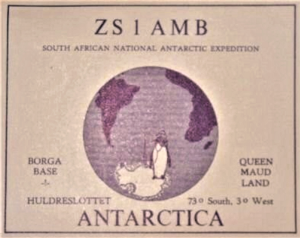 WAP thanks immensely our friend Oliver F6EPN  who,  with the pubblication of the old QSL of ZS1AMB active  from Borga Base in 1969, allowed us to complete the story of this Base been on the air, thanks to Chris Muir ZS6BCT (radio operator of the Borga Team expedition), 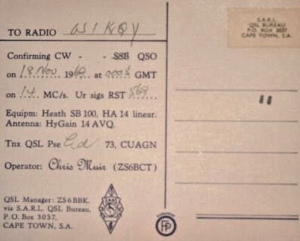 South Africa’s  Borga Base operate by ZS1AMB Nov. 1969. (QSL via ZS6BBK) is listed  on WAP-WADA Directory as WAP ZAF-Ø8.

Good use was made of South Africa’s new Borga Base, erected last year with the aid of Belgian aircraft during the joint summer expedition. The new base enables geologists to explore new areas and makes it possible to undertake research over a far greater area. 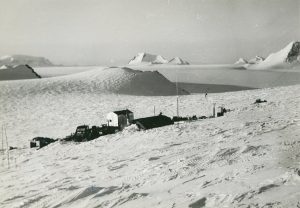 Borga Base, a 4-man wintering-over station, was established during May 1969 near Huldreslottet Nunatak (72° 50’S, 3° 48’W), some 350 km. due south of SANAE. The detailed geological investigation of the Kirwan Escarpment, particularly the Tunga region, was completed during the post-winter field-season and Antarctic history was made when the hitherto virgin region of the Escarpment between 5° and 7°W, was mapped during mid-summer 1969/70. The field parties progressed up to the south easternmost continuation of the Escarpment and could clearly see in the distance Heimefrontfjella where British geologists mapped in previous years. The inland base has proved to be a great success and Anton Aucamp and Leon Wolmarans (geologists), Chris Muir (radio operator) and Wilfred Hodsdon (leader and veteran of three expeditions) survived the wintering over extremely well.

11th Expedition geologists and support personnel have already taken over the Base for the 1970-season, during which it is hoped to complete the detailed mapping of the Basement rocks exposed along the Escarpment and in the Juletoppane (72° 30’S, 06°W).

The 11th Expedition will also establish a safe route across the Pencksokka from Borga Base on to the Polar Plateau. This will be used as the first stage of a 600-km over snow traverse from SANAE via Borga up to the northernmost turning point of the U.S. South Pole-Queen Maud Land Traverse. It is anticipated that this geophysical-glaciological traverse will take place after the winter of 1971.

Captain K. T. McNish, master M.V. R.S.A., repeated his 1964-radar survey of more than 350 km. of ice front in the King Haakon VII Sea. Significant changes in the configuration of the ice front have been recorded during the intervening five years. The most important change is the calving of nearly two-thirds (ca 1800km2) of Trolltunga, the more than 120 km. long ice tongue along the Greenwich Meridian. This event is undoubtedly of major glaciological and cartographic significance. Off-shore echo soundings have also indicated that the break-away point of the continental shelf lies at approximately 700 fathoms and that the continental slope is a very steep (1:4), linear feature. It was planned to extend the coastal survey during the present relief but close pack ice has thus far prevented any further penetration to the East.

1969 ended tragically with the unex-pected death of Gordon Mackie, Mechanic of SANAE 10. Three expedition members, including the late Mr. Mackie, left SANAE for Borga Base to collect a broken down tractor and make magnetic observations. On December 3, 1969, having completed the observations for the day, Mr. Mackie went to look at a windscoop, fell into it and was killed instantly. He is the first member of a South African team to be killed in the Antarctic. The burial will take place at East London, Cape Province after the RSA has returned from the Antarctic.

SANAE II, comprising 18 members, left Cape Town on January 10. 1970, for the Antarctic. The journey was uneventful and the transfer of the four expedition members to Borga Base, approximately 2 km. southeast of SANAE. The existing base at SANAE was erected at the beginning of 1962 and will be replaced by a new base at the beginning of 1971. A new power shack was also erected by the PWD team.

Planning the new main base is progressing well, and it is hoped to have it erected during January-February, 1971.

The old buildings, erected in 1962, arc now 35 feet under snow and ice, and are still withstanding all stresses and strains.