India does have the strongest and the largest postal network in the world. India also has a post office at the southernmost tip of the world in the continent of Antarctica.

Established at the scientific base station of  Dakshin Gangotri  (WAP IND-Ø1) during the third Indian Expedition to Antarctica.

It was first became operational on February 24, 1984 which was later brought under the Department of Post at Goa on January 26, 1988.

This post office was established with the name the Dakshin Gangotri PO and comes under the Department of Post of Goa. Scientist G. Sudhakar Rao was appointed as the first Honorary Postmaster.

The post office at Dakshin Gangotri was part of multiple support systems, which also includes an ice-melting plant, laboratories, storage, accommodation, recreation facilities, a clinic and a bank counter. 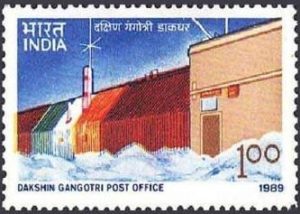 However, when the base submerged, the post office was decommissioned in the year of 1990. Later in,  with the establishment of the Maitri Base (WAP-IND- Ø3) a post office was also established named Maitri S.O.

A special postage stamp of  Rs. 1.00 was issued in 1989 commemorating the PO building in its ice-bound surroundings in Antarctica.