In 1897, the young Belgian “Adrien de Gerlache”, bought a Norwegian ship called ‘Patria’. He changed the name into “Belgica” and set sail to become the first man ever to scientifically explore Antarctica during the winter. 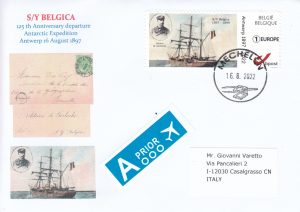 Monday  August 16 , 897. The port of Antwerp is filled with people. The National Anthem is being played, canon shots of joy are heard across the River. The Belgica leaves the harbour, setting sail to Antarctica. Other than a lost whaler, there has never been a soul nearby…

After three months of darkness, -40°C, storms, despair, desertion, mutiny, starvation, disease and death, the Belgica returned to Antwerp on the 5th of November 1899. The crew was received in triumph. Even before they disembarked, De Gerlache and his officers were knighted by The Order of King Leopold. The Belgica Expedition returned with an enormous amount of valuable scientific information. 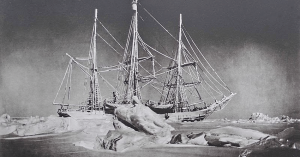 In 1916,  Belgica was sold to the Store Norske Spitsbergen Kulkompagni , renamed Isfjord and converted to a passenger and cargo ship.  She was rebuilt to include cabins for female staff. Isfjord was used to carry coal and passengers between Svalbard and northern Norway. In 1918, she was sold and renamed Belgica, being converted to a factory ship.

Requisitioned by the British in April 1940, she was used as a depôt ship, being scuttled when the Franco-British Expeditionary Force evacuated Harstad in northern Norway.

Polar ice couldn’t break the Belgica but war could. The ship sank in 1940 nearby the coast of Harstad (Norway), in mysterious circumstances.
50 Years later, on Easter of 1990, a Norwegian diving club discovered the wreck, only 22 meters deep and 200 meters off the coastline. It was immediately clear that the remains of the Belgica could not be restored. But they did contain enough valuable information for the ship to be rebuilt.
See the video at: https://youtu.be/8uSqKoWbj-w