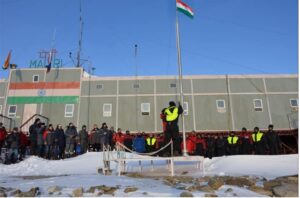 The 74th  India Independence Day celebrations  has been a great moment  at Maitri Indian Research Base in Antarctica (WAP IND-Ø3).

Mr. Deepak Gajbhiye,  Leader of the 39th Indian Scientific Expedition to Antarctica (ISEA) has been the head of  the Flag Hoisting Ceremony together with Mr. Kailash Bhindwar (Deputy Leader) and the whole  Maitri Team overwintering in Antarctica. Guests of honor, Mr. Vladimir Bondarchuk, chief of the nearby Russian Novolazarevskaya Station (WAP RUS-Ø9) and it’s  team.

Unfortunately, the Ham community worldwide is missing HF contacts with both Antarctic stations Maitri and Novo. Too bad, in this year’s Antarctic Campaign there aren’t Ham radio operators active among the personnel at  the Bases.