LU4ZS, Marambio Antarctic Base Station (WAP ARG-21), operated by Cristian LU4CMF, will be on air from July 7 to July 15 in SSB and FT8 modes. Cristian will also join the participation in the annual event “The Argentine Republic in two days” this 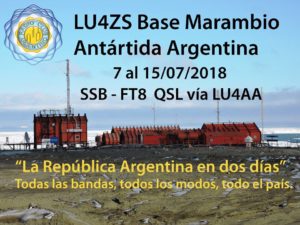 weekend,and it  will be managed by LU4AA, foreseeing an operation in 7 MHz band,  SSB mode.
The contacts of this operation will be confirmed via LU4AA.

Here below, a more than shareable comment by Juan Manuel Pereda LU4CJM, aka operator at LU1ZI Carlini Station and to few of the very rare Argentine Refuges in Antarctica

Amateurs, media and institutions related to the radio around the world,  contact me asking when LU1ZI Argentine Antarctic Base “Carlini” (WAP ARG-20),  one of the “Most wanted contacts” at international level will be airing again.

How to explain to all these people that the “change of authorities”, the “lack of investments in equipments” and the ”lack of interest in the Ham radio activity” made the Argentine Scientific Bases in Antarctica disappearing from the Ham radio field?

Luckily there are people who carry on huge efforts to continue the activations from the white continent. Congratulations to the Marambio Base and to the Argentine Radio Club LU4AA for persisting to spread Argentine Antarctic Ham radio activity around the world.