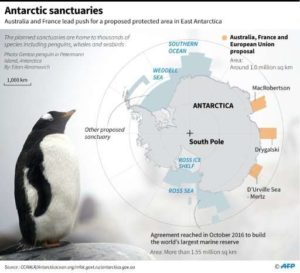 A multinational effort to create giant marine sanctuaries around Antarctica to counter climate change and protect fragile ocean ecosystems has failed for an eighth straight year.

Opposition from China and Russia torpedoed the proposal at the annual meeting of the Commission for the Conservation of Antarctic Marine Living Resources (CCAMLR), a consortium of 25 nations plus the European Union, sources familiar with the closed-door discussions told AFP. Beijing and Moscow have been key in blocking the scheme since it was first floated by Australia, France and the EU in 2010 before being scaled down in 2017 in an attempt to win greater support.

The meeting in the Australian city of Hobart, which ended late Friday, considered proposals to create conservation parks in three key areas off Antarctica covering a total of some three million square kilometres (1.2 million square miles).

The areas are home to penguins, seals, toothfish, whales and huge numbers of krill ,  a staple food for many species. The series of proposed marine protected areas (MPAs) would protect that marine life and crucially allow migration between areas for breeding and foraging.