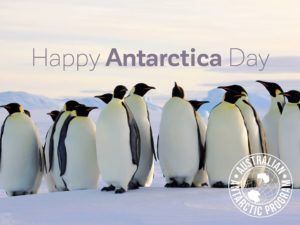 Sixty years ago, twelve nations agreed to set aside Antarctica “for peaceful purposes only”, as a scientific preserve for “the progress of all mankind”,  met in Washington, D.C. to sign an unprecedented document: the Antarctic Treaty. The original signatories were the 12 countries active in Antarctica during the International Geophysical Year (IGY) .

The year was 1959 and the end of the International Geophysical Year had seen research in Antarctica take giant leaps forward. Scientists from all over the world were making incredible discoveries in what was a largely unexplored environment. But after some saw the potential for conflict between nations who were making territorial claims to parts of the continent, the Antarctic Treaty was negotiated and signed on the 1st of December 1959 and enshrines Antarctica as a place of peace, science and international cooperation. Today 54 nations are party to the Treaty.

Antarctic nations around the world are today marking the 60th Anniversary of one of the world’s most successful international agreements, the Antarctic Treaty.