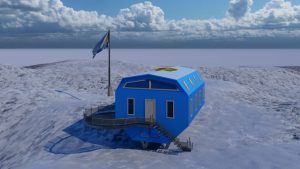 Three new multidisciplinary laboratories for the Esperanza, San Martín and Orcadas bases, together with new shelters on the Vega and Cerro Nevado islands,  near the Marambio Base will be built during 2023 by Argentina in its Antarctic territory, based on an agreement signed last wee by the Ministers of Science, Daniel Filmus, of Defense, Jorge Taiana, and Foreign Affairs, Santiago Cafiero.

The initiative was presented at the headquarters of the Ministry of Defense, where officials confirmed that the buildings were designed by engineers of the Argentine Army who hope to complete their construction during the next Antarctic summer campaign in 2023. The Ministry of Science will finance them with 200 million pesos within the framework of the Federal Program Build Science program.

These three new laboratories and the two refuges are part of the first stage of the “Multidisciplinary Antarctic Laboratories” project, promoted by the Ministry of Science, the Argentine Antarctic Institute (IAA), the Joint Antarctic Command (Cocoantar) and the General Manuel N. Savio Foundation.

These three laboratories of 120 square meters and the two shelters of 20 square meters represent a great advance of the scientific capacities of Argentina since it allows to improve the scientific-technological work in Argentine Antarctic bases that until now concentrated much of their scientific activity in the summer months, it was officially reported.

As soon as these new sites will be open, and a name for each one will be given (probaly the refuges will be called the Vega Island Refuge  and Cerro Nevado Island Refuge, they will be incuded  in the list of  WAP-WADA Directory as WAP ARG-NEW.