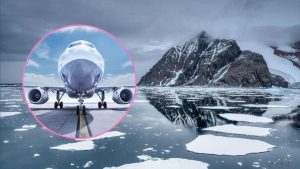 Something interesting has been publish recently on the web. Here an abstract:

Among the places over which we must not fly we find, for example, Antarctica. It is forbidden to fly over Antarctica because, due to the strong winds and storms.

First, the pilot would not have good visibility; furthermore, in the event of an emergency landing, passengers would be exposed to almost certain freezing. Furthermore, Antarctica is made up of mountains which does not make it a suitable territory for landing a plane.

The North Pole is surrounded by magnetic fields whose radius and direction can change for kilometers even every year: if the magnetic field moves, the pilot cannot orient himself precisely to the north and would not be able to keep the course and land. In fact, the runways in airports are oriented by calculating the distance from the North Pole: a strong magnetic field such as that of the North Pole, therefore, would cause a loss of alignment and the impossibility of reaching the landing strip. This is why pilots must avoid flying over poles and magnetic fields in general.