The event in Vlissingen was the official transfer of the ship from its European build team, marking the final stage of a 1900-day journey from contract signing to handover. 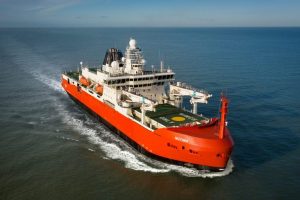 The design and build of the vessel has been a multi-national effort between the Australian Antarctic Division, the vessel operator Serco, Danish concept designers Knud E Hansen, Dutch engineering and detailed design team Damen, and the construction team at Damen Shipyards Galati in Romania.

Thanks and credit to: Flying the flag over Australia’s new icebreaker – Australian Antarctic Program (News 2021) (antarctica.gov.au)

The Australian flag is flying on the nation’s new Icebreaker RSV Nuyina for the first time after a ceremony in the Netherlands.

RSV Nuyina  is one of the most advanced polar vessels in the world, integrating complex scientific technology, logistical capabilities and expeditioner transport into a single bespoke ship.

Thanks and credit to antarctica.gov.au